Posted on Monday, February 11, 2019
The Combine in Half-Life 2, and the Civil Protection especially, have some very distinct and iconic elements to them. During the build, I kept telling my team that the costume was basically three things - the helmet, the Stun Stick, and the voice, and that everything else was just window dressing. The helmets were already a slam dunk, so it was on to the rest of the parts. 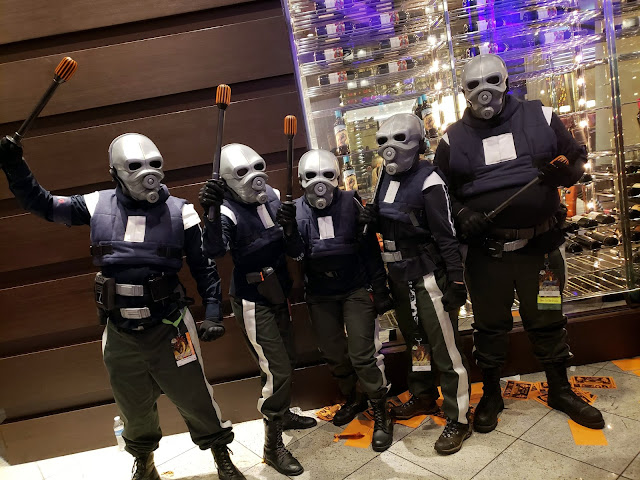 One major component of the build was the voice modulated radios. The Combine have such an iconic sound to them that it was critical that it somehow be included. I didn't want to use a low quality voice modulator, because A.) they never sound "right" and because the sound is so distinct I know I'd never be able to actually get them sounding right. And B.) the Combine's voice modulators make them almost unintelligible, and I didn't want people confusing me asking them to move away or stand back as part of a performance.

Instead, I opted for the next best thing I could: I used the real game audio. 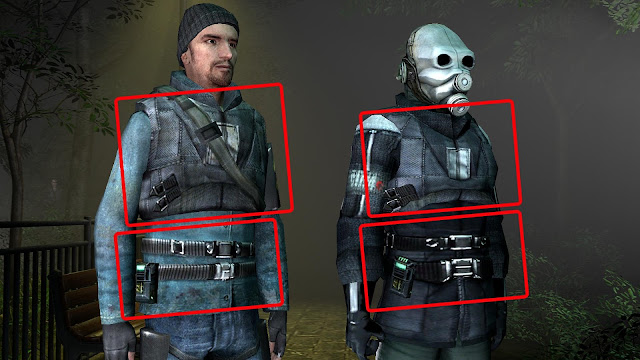 During the early "pre criminal" part of the game, the Civil Protection are docile and you can observe them walking around. They play random radio chatter throughout the game, but you get the clearest vision of it during this opening section of the game. They have these radios on their belt, and I decided to use them to house an Arduino and some audio components from Adafruit. The electronics build part of this is pretty straight forward - an Arduino Uno using an Adafruit Wave shield and a 3.7W amp, fitted on to a prototyping board for easy packaging. 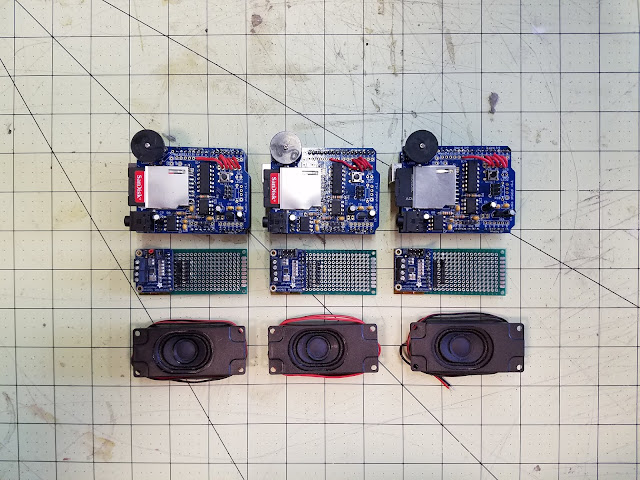 Three of them isn't necessary for the build, but I wanted three of us to have radios for some fun sounding cross chatter, so I bought three of everything.

I used Fusion 360 to build a case for the electronics and made it look as close to the game radio as possible, although it did wind up being a bit larger than I would have liked. The real workhorse is the code that I wrote; in the game, the Combine radios use randomly generated "sentences" based off of rules in a sentences file and words and sentence fragment sound files. My code emulates that radio logic, building a sentences and playing the sound files extracted from the game.

The result is as authentic of a Combine radio as you can get.


More or less finished up the Combine radios. These use a Wave Shield and Amp from @adafruit to play procedurally generated radio strings. I really think this is going to put our Combine cosplay over the top! #hl2 #hl2cosplay #combine @steam_games #dragoncon #dragoncon2018 pic.twitter.com/szALc0IUqq
— Michelle Sleeper (@msleeperdotcom) August 23, 2018


Then it was time to build the weapons. The Stun Stick was a deceptively simple part of the build. Early in the game the Metro Cops you meet use these electrified billy clubs to keep the local population in line, and assist in local aluminum can cleanup.

As with most parts of this build, I started by extracting the game model to use as a reference - only this time, there was a bit of a snag. The player never actually gets a hold of the Stun Stick, so all that exists is a very low resolution "world model". 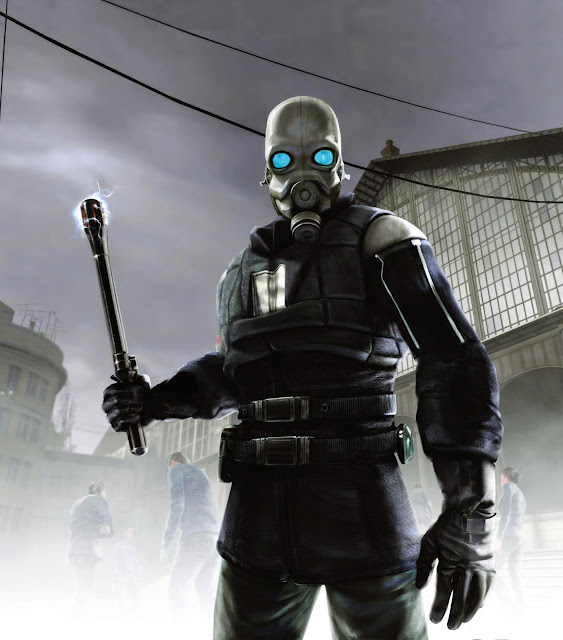 After digging deeper, I actually found 2 useable "view models" of the Stun Stick - one from Half-Life 2: Deathmatch, wherein some players play as the Combine and use the Stun Stick in lieu of the crowbar. And another in the game files of a cut weapon. The next problem is that these 2 view models were very different from one another. With the only definitive version being the low resolution world model, I decided to create an idealized version of the Stun Stick using elements from all 3 versions. 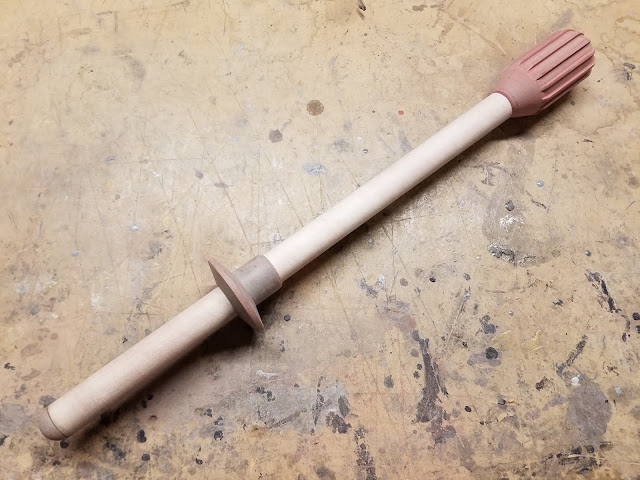 This was designed in Fusion 360 and printed on my fleet of 3D printers. It was designed to fit around a 3/4" PVC pipe, so that the only parts that needed to be molded and cast were the head with the flanges, the cross guard, and the pommel. This helped keep the weight and the cost of making them down, since I didn't need a large mold or a lot of resin. The Stun Stick heads were molded in a 2 part block mold, and the pommels and cross guards were molded in an open block mold together. 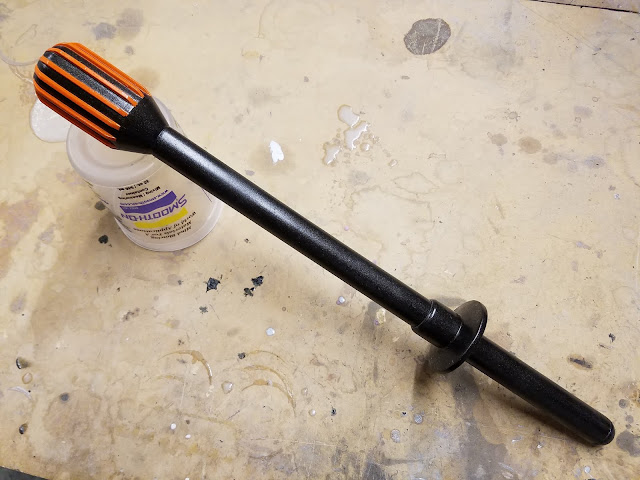 Once all of the Stun Stick parts were cast up, they were primed and painted in a base coat of dark metallic paint, and then the flanges were masked off and painted bright "safety orange". The bright color really made them pop.


The Metro Cops also carry pistols on them, which are nothing more than an H&K USP Match with a giant compensator on the end of it. Rather than spend a ton of time 3D modeling, printing, and sanding and finishing one of these, instead I opted to find a low cost 1:1 scale airsoft replica and use that as a base. The only thing I needed to fabricate was the compensator, and after a day's work the pistol was ready to mold. 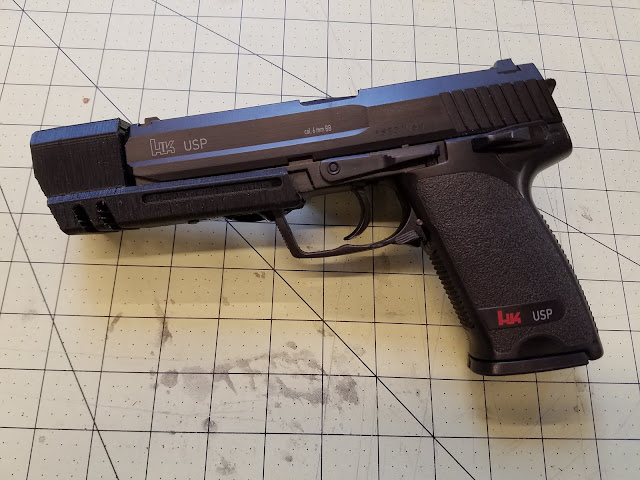 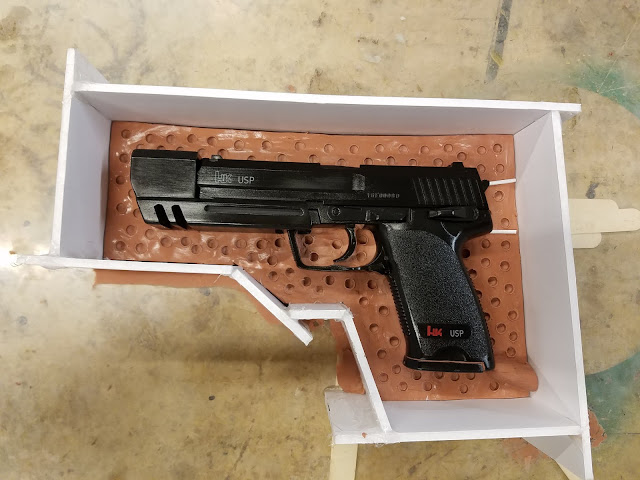 The pistols were also molded in a 2 part mold. The pistols are a matte black with a bright metallic slide, so like the helmets I decided to cold cast the pistols. I wound up cold casting the entire weapon, which made weathering it as easy as gently scraping, scratching, and sanding away the paint to reveal the metallic under layer. Painting and weathering was as easy as masking off the slide, painting the rest of the gun matte black, then scuffing and scraping away the paint where I wanted obvious signs of wear. 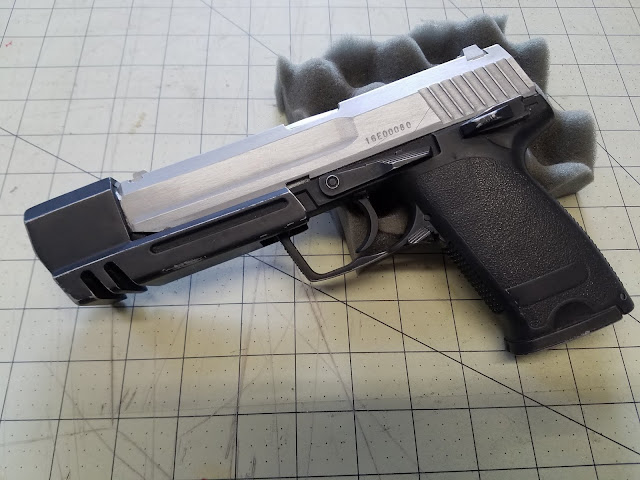 A last minute detail I added was the big metallic belt buckles. These were thrown together in Fusion 360, then printed, cleaned, molded, and cold cast just like the pistols. Unfortunately this was such a last minute detail that I failed to get any pictures of the entire process.


All that's left after this is the flak jackets and putting the costumes all together.