Posted on Thursday, February 21, 2019
With the helmets, weapons, radios, and other props finished for the Metro Cops, the last thing we needed to put together was the flak jackets, the arm bands, and modifying the base garments. The flak jackets took by far the most work, but as they are one of the more immediately recognizable parts of the character, they had to look right. 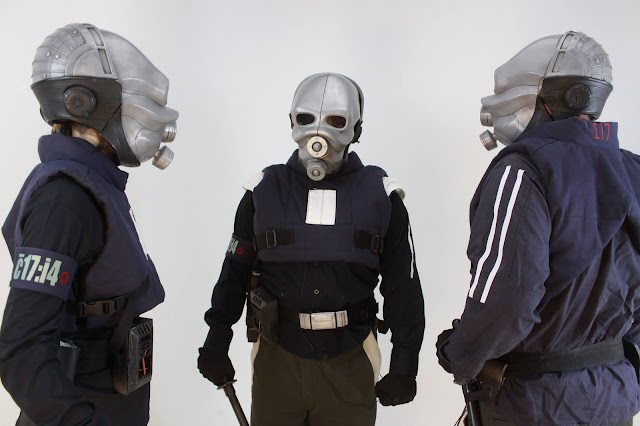 Full disclosure: I had very little to do with this part of the build, as my sewing skills are near zero. Nearly all of this work was offloaded to my friends Jeanette at Cogdell Creations, and Julia at Crazy 8 Cosplay, and all of the embroidery work was done by my friend Liz at Myouri Cosplay.

The base of the flak jackets was a sleeveless winter vest, which was mocked up so that the quilting pattern could be drawn and stitched. After this mock up was modified, I took reference photos of it and digitized it so that we could make patterns from it. Because there was going to be 9 of us in these costumes and we ran the gamut of sizes, I made patterns in several sizes. 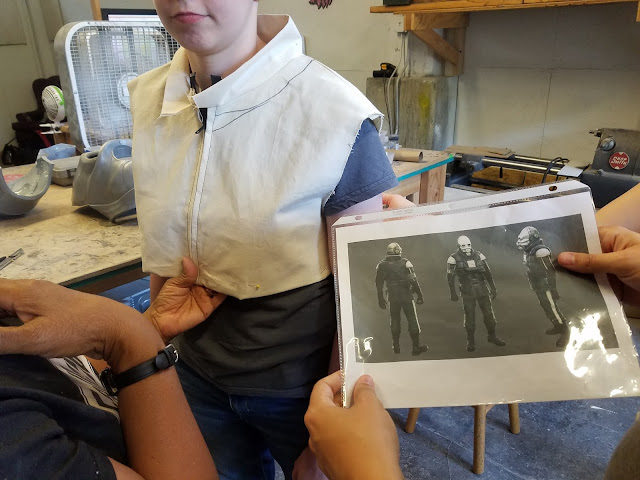 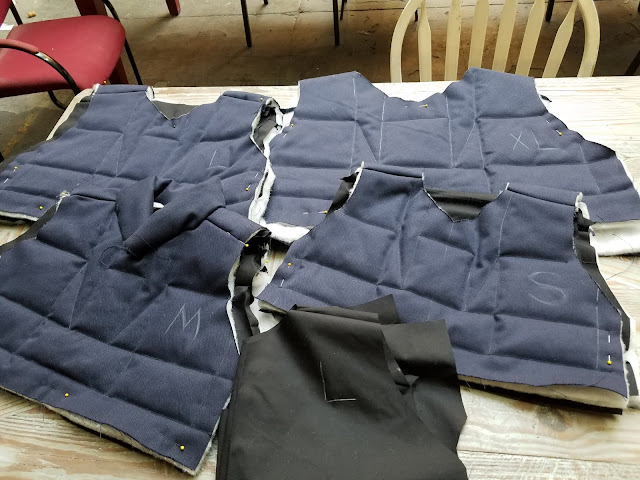 Finding the right fabric was a real chore, since the game texture is so low resolution that any pattern on it is nearly indecipherable. The color was also hard to pick, being somewhere between a dark blue and a bluish grey. I settled on this dark blue-grey upholstery fabric that had a coarse and visible pattern on it, that somewhat mimicked real world flak jackets. I also chose a bright white with a similar pattern for the chest detail, and the shoulder caps. 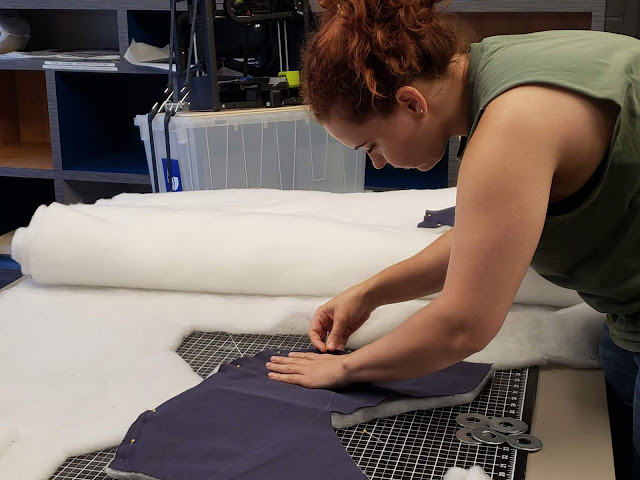 The base garments were off-the-rack police style shirts and pants. The shirt color was LAPD Navy, which complimented the blue of the flak jacket fabric nicely. The shirt had 2 white stripes added to the upper arms. The pants were olive green Dickies, which we modified by adding the thick white stripe down the side of the leg. The gloves were black airsoft gloves I found on Amazon that looked close enough and were cheap enough in bulk. 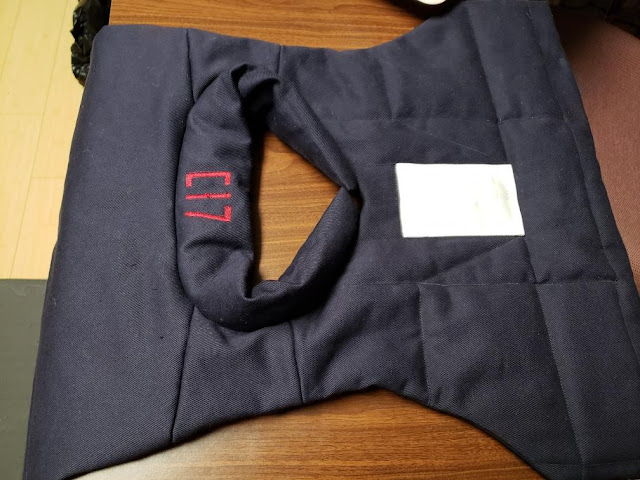 The flak jackets were quilted with a quilting batting, in a similar manner that the Colonial Marine abdomen pads were made. The back of the neck had a "C17" logo embroidered on it, and the arm bands were embroidered as well. These were fitted with velcro to make putting on and off easier, although in the future I may modify them to permanently attach as the velcro caused them to slide down often. 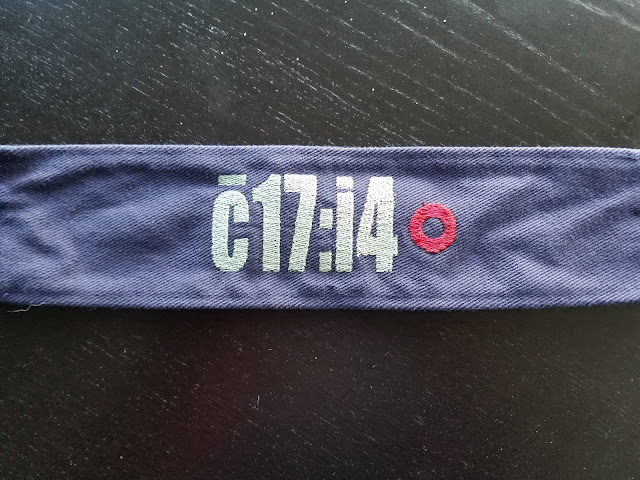 With the final parts done, and the checklist of everything gone through a dozen times to make sure nothing was forgotten, we headed off to Dragon Con where I revealed the group. It was a pretty big hit, especially with fans of the game series. 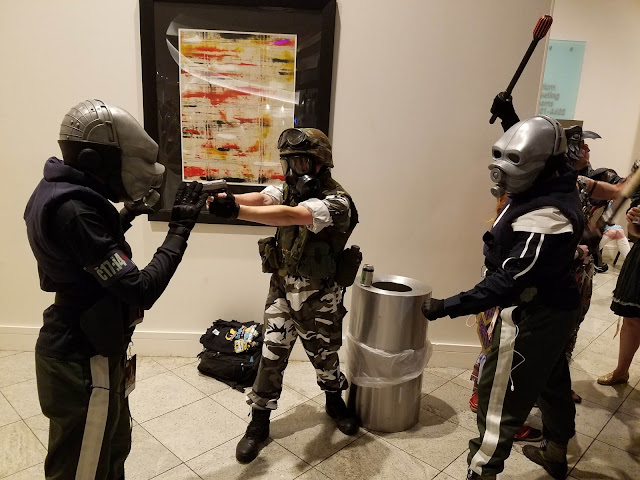 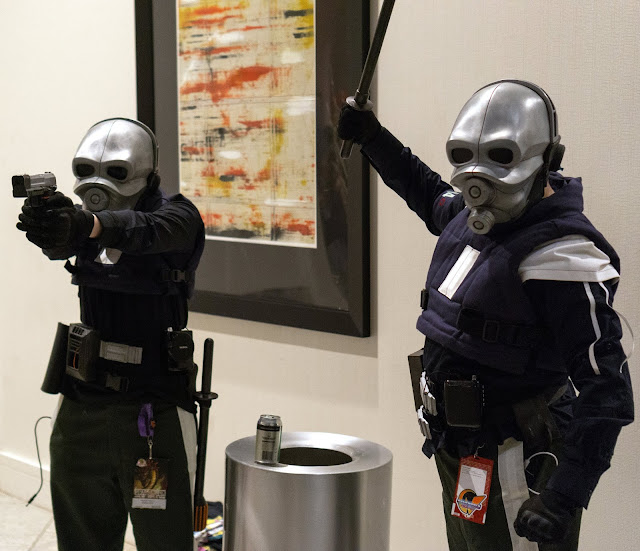 I liked watching people try to figure out what we were, and then their face light up as they recognized us. I also entered the Video Game Cosplay Contest last minute, and won the SFX category, which was neat and unexpected. 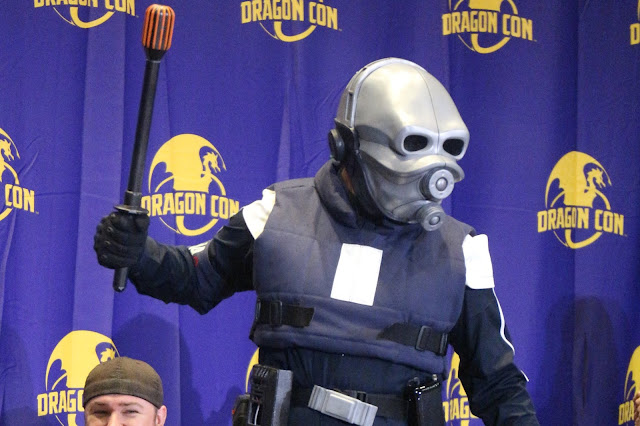 And then 2nd place in the Atlanta Maker Faire Cosplay contest, which was also neat. 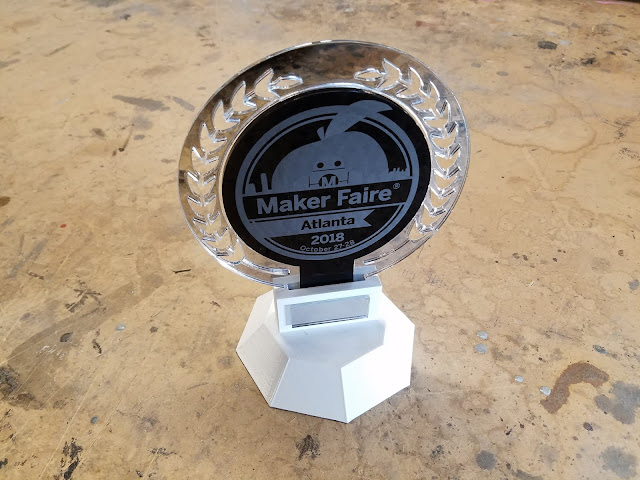 I still need to finish the Solider and the Elites. But that will be a project for another day. Thank you for reading!